HideMyAss is a popular VPN originally found in the United Kingdom. In 2015 it was bought by Avast, a big security company. HideMyAss has 900+ servers in 190 different countries, which allows it to demonstrate good speed and performance. HMA provides decent customer support and it is easy to use. In this HideMyAss review, we checked the VPN for all aspects such as privacy, security, speed, performance, customer support, and pricing. Like any other VPN, HideMyAss VPN has some advantages and some weak points. Let’s check out how effective and feasible HideMyAss VPN is.

HideMyAss boasts robust and strong security. It uses 256-bit AES cipher with RSA-2048 encryption SHA-1 hash authentication. In combination with the OpenVPN protocol, it ensures secure and well protected connections. HideMyAss is on par with the industry leasers when security is concerned. However, if we take a look at the company’s privacy policy, the picture is not that bright. Most VPN users strive for the maximum possible anonymity that can be maintained thanks to zero-logs policy. Unfortunately, this is not the case with HMA. They do keep users? logs including IP address, the time the of connection and the amount of bandwidth used. HMA can easily identify the sort of user’s activity when using a VPN, e.g. torrenting. And they can further hand this data to third parties, which makes it a bad choice for privacy. 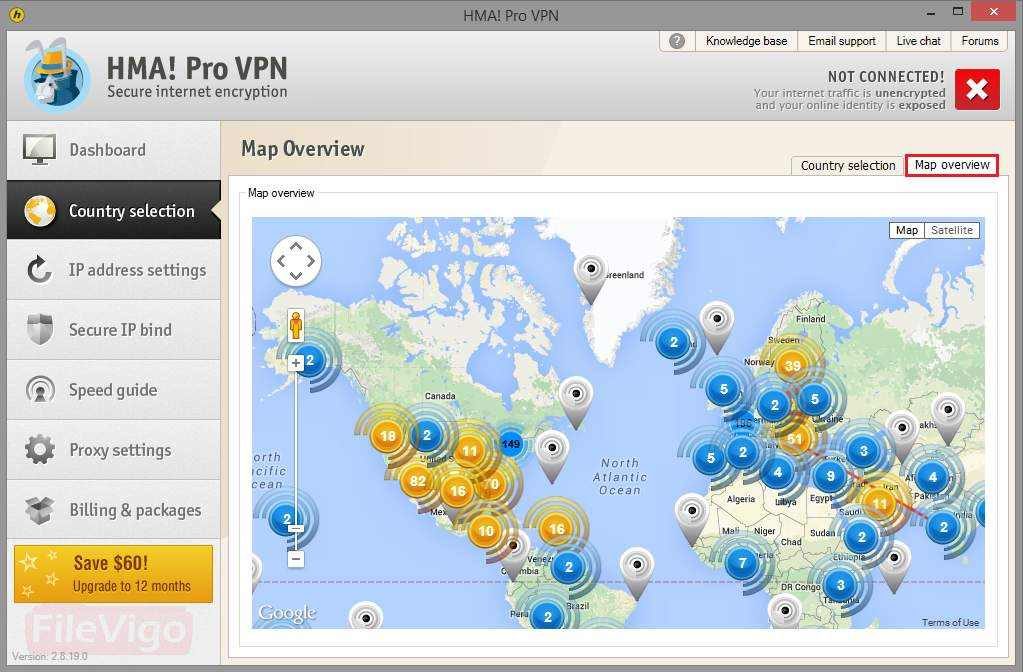 HideMyAss VPN app is compatible with iOS, Android and Mac devices. It also works on the router. Standard five simultaneous connections are allowed under one subscription. HideMyAss has 900+ servers on 280 different locations in 190 countries. These servers are spread across all six continents. A general rule is the more servers a VPN has, the better performance will be. And this is exactly the case for HMA. HideMyAss VPN demonstrates rather high speeds, which means it should be good for torrenting and streaming. However, as far as you remember their logging policy is not at all torrenting-friendly, so we don’t recommend this VPN for P2P It is worth noting that while HMA doesn’t make your Internet connection slow, it’s results are still not comparable with the world’s best VPN providers.

HideMyAss allowes P2P file sharing and streaming. However, if you decide to download pirated content using this VPN, you may face harsh consequences. HMA is known to send copyright violation notices to its customers. It may also throttle your connection speed. On the plus side, speaking about streaming, HMA is among the top providers who still manage to unblock access to all popular services including Netflix. Hulu, BBC iPlayer, and HBO will also be available.

You can see there is no free version available for HideMyAss VPN. If you want to try this VPN, you can benefit from a 7-day free trial. The VPN also offers 30-day money back guarantee. You will have a whole month to test the performance, speed, security, and privacy and to decide whether you want to stick to this VPN or not. HideMyAss VPN no doubt provides robust security and speed but still expensive as compared to other companies providing the same features at lower prices. It doesn’t have any special feature in contrast to other VPN’s. The high price is the major drawback of the HideMyAss VPN.

HideMyAss VPN offer 24/7 live chat support. The professional technical staff is available to resolve any issue you face. They usually respond in the live chat within a few minutes. Email support is also available. If you are not in hurry, you can address your queries through email. They usually reply to emails within a couple of hours. The only support missing in through phone. But it doesn’t mean that the support is weak as they are serving their customers through strong, fast, responsive and professional live chat and email support.

All the pros and cons taken into account, is HideMyAss worth trying? It is a good option in terms of security, unblocking sites, speed, performance and customer support. It also has a user-friendly interface and easy to use. The major drawback of HideMyAss VPN is the lack of no-logging privacy policy. HideMyAss keeps some major logs, which means you get secure connections, but not privacy online. After all, the decision is in your hands, if you don’t bother about privacy much, and the main thing you are looking for; is speed and performance then HideMyAss could be a good choice. On another hand, if you seek for anonymity and don’t want to compromise it at any cost, then you better look for any other VPN with no logging policy. The high price is also an issue with the HideMyAss VPN. Same features are offered by other VPN companies at lower prices. But keeping in mind its high download speed, performance, and security, HideMyAss is a good VPN service.